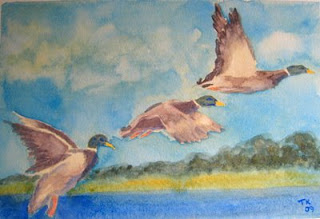 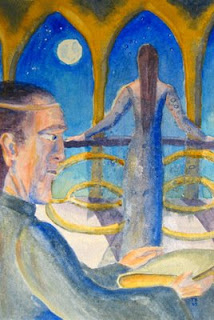 I have plenty more Tolkien-related paintings in my head, and many non-Tolkien ones too. Eventually I will get round to completing them all!
Posted by Teresa N at 18:11 No comments:

A Plethora of Printmakers

July kicked off with the Childwickbury Arts Fair, just up the road from us here in Harpenden. A great opportunity to meet with and chat to other artists - all those demonstrating were extremely accessible, and had lots of ideas to share. Within an hour of arrival we had a list of hints and tips! There was a great range of paintings, ceramics, woodwork, metalwork, jewellery, glassware (my friend bought a wonderful vase from Siddy Langley) and - best of all - a barn full of printmakers. 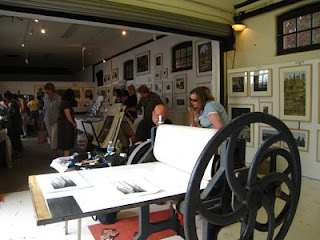 printmaking in the barn at Childwickbury Arts Fair

Until now I haven't been particularly interested in printmaking but I found it fascinating to watch. Barry Goodman was demonstrating collographs and took the time to explain how he went about creating his amazing prints of retro verhicles. I decided that it's definitely a subject I need to find out more about. 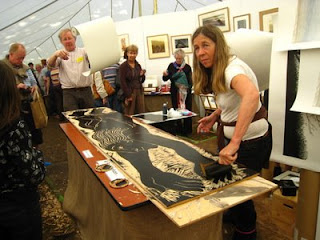 Two weeks later we visited Art in Action at Waterperry. Despite the horrendous traffic queues outside - and the struggle through the mud inside - our trip (eventually) proved to be well worth it. With my appetite whetted, I made straight for the printmaking tent. Merlyn Chesterman was making huge hand-printed woodcuts - and encouraging her audience to join in - while Jason Hicklin drew an enormous crowd with his lively demo of etching. I had to smile when he said that the best bit was using the press - it's such a boy thing - and his enthusiasm was infectious.

So at some point - probably over the winter - I'm going to take the plunge, although I think I'll stick to small hand-made prints, at least to start with. Even my small box-room studio will accommodate a bit of lino-cutting!