Until the advent of digital technology I'd only used cameras for holiday snaps; then I got myself a Canon Sureshot, which although now only nine years old, is already a museum piece, with it's 64MB memory card and the four AA batteries needed to power it up. By the time I bought my Ixus 850 I'd discovered Picasa and was also bringing my dormant Photoshop skills into play.

When you have the ability to take a hundred photos a day (yes, I've done that!) it's easy to lose track of them, and useful sometimes to look back through the archive; you unearth all sorts of forgotten bits and pieces which deserve a bit of an airing. I've dug three out to share on today's blog; not the most scenic, or the prettiest, but ones where something unusual caught my eye. 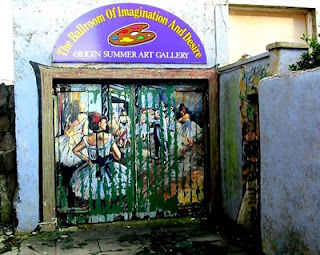 The first was taken on a holiday in County Kerry; we were taking a walk around Waterville when I spotted this doorway up an alley. It refers to an art exhibition held four years previously; there was something haunting and at the same time incongruous about it. It's still one of my favourite Ireland photos. 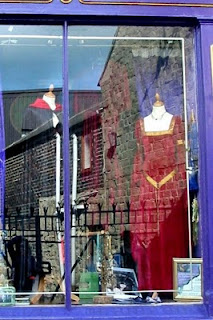 The next photo is the window of Arnemetia's the Purple Shop in Market Street, Buxton. We were staying just around the corner for the Gilbert & Sullivan Festival; every time we passed this window I had to stop and look! When I took the photo I knew that the houses opposite would be reflected in the glass but I hadn't realised how successful the effect would be. Again, it was the incongruity of finding a lovely little New Age shop in a side street of Buxton which first grabbed my attention - although, when I think about it, why not? 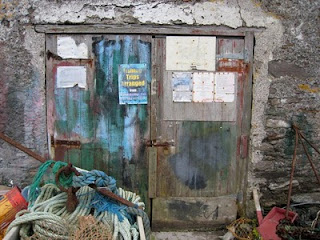 The final photo is a more recent shot of a shed near Ballinskelligs Pier in Co Kerry. It's a lovely area with beautiful scenery, so why this, you may ask? I liked the colours and textures of the paint, and the stone, and the bits and bobs lying about. The shed itself isn't incongruous - it fits perfectly well in its own surroundings - but perhaps my choice of subject is!

We are all photographers now; the digital age has seen to that. Long may it continue! 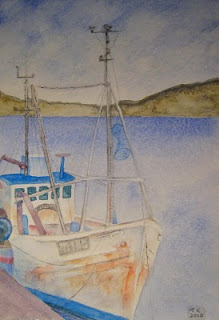 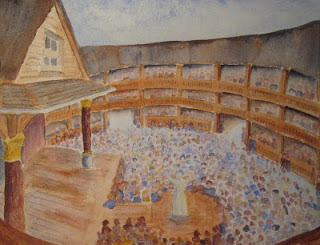 It was only when both paintings were finished and I took another look at them that I realised I hadn't just painted a boat and a theatre. They are both distinct personalities; one sadly no longer with us, the other hopefully around for many years to come!
Posted by Teresa N at 16:01 4 comments: