Going with the Snow

Most Christmasses, I'm given a book about painting - usually from my wishlist.  This year's was How to Paint Colour and Light in Watercolour by Jean Haines, which I first spotted in an edition of Artists & Illustrators.   Frankly, I thought it might give me a shove - I haven't done any painting for a while - and bring me back to where I started out with watercolours several years ago - letting go and going with the flow.  I'd seen some snowy Cambridgeshire fields from the car on Boxing Day which had given me the idea for a subject.  Even a heavy cold couldn't deter me from making a start (though it did ensure I sat quietly and read the book through several times before attempting to put anything on paper). 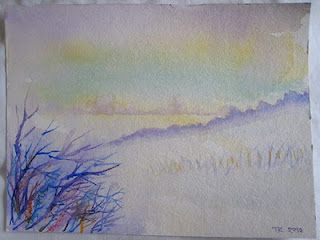 Now, I never like to follow a book slavishly, but, aware that I'd become stuck in a rut with my colours, I chose suitably snowscape-y ones similar to those which Jean recommends - violet, ultramarine, alizarin, indian yellow and turquoise and laid down a wet blended wash of several shades as instructed.  Then I mapped in some hedges with violet and ultramarine - remembering to let them blend on the paper rather than mixing them on the palette - and added a line of grass.  Deciding that something was needed in the foreground, I painted in some cautious twigs - far too carefully, but Jean came to the rescue with the idea of splattering some water on to soften them.  Even so, the first painting turned out a bit on the stilted side, and the washes dried extremely pale - but hey, I'd done a couple of hours painting and really enjoyed it!! 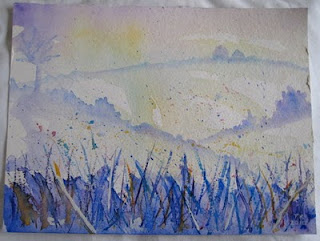 For my next attempt I tried to be a bit more dramatic with the washes, and used Jean's suggestion of tilting the paper to create a few runs which might suggest something for the composition.  That's how the tree (which I never envisaged in the first place) ended up top left; the way the washes dried also suggested where the hills should be (we're a long way from Cambridgeshire now.  Perhaps somewhere near Hereford?).  Instead of twigs I added a foreground of grasses over some large wet areas I'd slapped in with the Chinese brush  I bought last July and never used (thanks for the tip, Jean!).  It's a long time since I've done any spattering but it soon came back to me (including - too late - the bit about never wearing a white T-shirt when trying this technique) and I added some white gouache snow to the grasses for good measure.  The spattering does add life  to this picture - perhaps a little too much!! 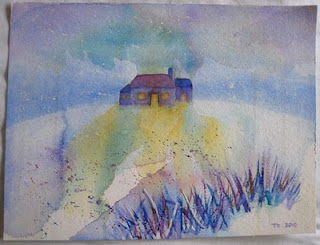 For the third painting I was determined to strengthen those background washes still further.  Ironically, the fact that our snow has melted means that the days appear much darker, and lack of time decreed that I laid down the background relatively late one afternoon.  By the time I went to bed I had no idea how to proceed with the resulting effect - I couldn't see a picture there at all - but I woke this morning with the idea of a house spilling light onto the snow from its doors and windows.  I'm not that keen on the hedgerows in the first two paintings so I left them out completely and defined the hilltop with an ultramarine wash over the sky.  More grasses, a bit of spattering with colour and white gouache - it's no masterpiece but it's shown me the way forward LOL. 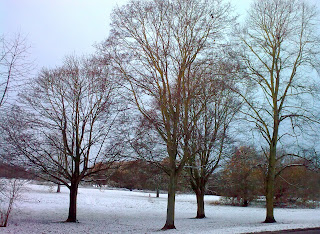 A gentle dusting of snow had me reaching for my mobile phone camera as I walked gingerly to the station along icy pavements soon after 8am yesterday morning.  I've had little or no time for anything vaguely creative recently beyond singing in some carol concerts, but my imagination was caught by the sun lighting up the still autumnal colours of the trees, set off by the snowy highlights.


Risking life and limb as I teetered along I managed to grab a variety of shots without falling over or suffering frostbite to my camera hand.  Gathering clouds filtered the sunlight - the whole effect was lovely and subtle.

It's all been a bit different today, however - snowing steadily (or should that be heavily?) from 11am to 4pm.  Here's a shot from my back bedroom window at lunchtime.  Compare it with the balmy scene depicted here and you'll notice the difference! 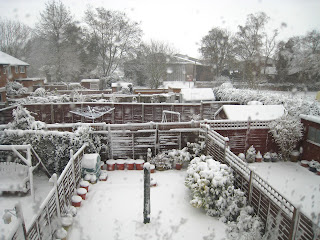 another view from my back bedroom window!
© Teresa Kirkpatrick 2010
The unusual weather is making it difficult to get about - I still have no idea whether I'll make it to church tomorrow,  let alone work on Monday - and I've warned my Christmas guests to make sure they  have a suitable Christmas lunch to eat in their freezer at home just in case they don't make it over here.  But it's also an opportunity to take photos and look at things with an artist's eye.  Who knows, I might actually manage to do some painting or printmaking over the Christmas break! 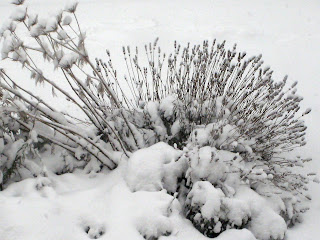