The longer days have encouraged me back into the studio to work on a reduction linocut that I initally sketched out last September, based on a photo taken almost exactly a year ago of some redwings sheltering from s snowstorm in our holly tree.

It's turning out to be a challenge. I kept changing my mind about where to put the snow, making the final revisions to the design on the lino.  The red carbon paper I used transferred to some of the prints - luckily in places which won't show - and I need to work out why.  I suspect it's either because I stained the lino or used extender.

I started with twenty sheets of paper - four of which were ordinary Hosho for proofing and the rest were Awagami 80 gsm Hosho - only to discover that one of them had become marked, possibly while I was cutting the paper to size. So the print run for the first layer became nineteen.

The printing of the second mid green layer progressed smoothly until I started to get tired.  I had marked the back of each sheet up correctly for the registration device but still managed to place the sixteenth print so badly out of position that it went in the bin.  So now the run is eighteen . . .

I've also realised that I haven't cut the twig that the lower bird is sitting on properly, so I will have to correct that when printing the other layers.  I do have a plan - let's hope it works, as I really don't want to have to start again! 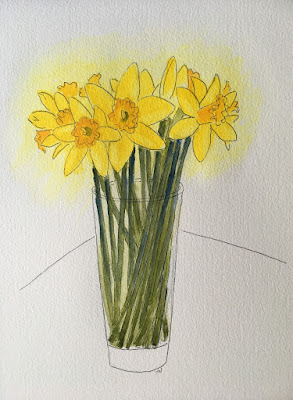 It's that time of year when the days start to get a little longer and I realise that I haven't done any watercolour painting for what seems like an age.  This year I decided to loosen up and have some fun with the flowers various generous friends had given me.

I had the urge to paint the Alstroemeria in a jug in my hallway one sunny afternoon; but the weather was gloomy when I managed to make the time, balancing my paintbox on a cupboard and the paper in my hand. The result was a little stiff so I kept adding water until the whole thing softened up.  Cropped, it might even warrant a frame . . .

The green and white bouquet was a gift in more ways than one, as I brought it into the studio a few days later to be the subject of my next watercolour sketch.  I used the same paintbox, which had itself been given to me some years ago by a neighbour.  It always presents a challenge because the colours are not my usual ones.

I built the image up in layers, then added in a background - although I rather like the unfinished version in the photo above.  Again, the finished painting looks better cropped, and I might well be putting it into a mount some time.

The daffodils were a complete surprise, six bunches arriving in the post as a thank you. To paint them I decided to use pen and wash, which I haven't touched for several years. I resisted the temptation to add a background this time, and I think it works rather well. I've enjoyed making these flower sketches so much, I might have to do some more . . .