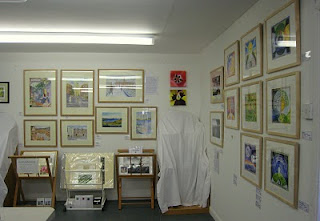 The Artscape Arts 2010 exhibition is up - more or less - and nobody is more surprised than the five of us taking part this year.  We'd been warned that the upstairs room at Artscape would have a little less hanging space than usual, so I guess we'd all brought along pieces which could be hung in a variety of ways;  and several of us had been prepared to take stuff home again if there wasn't room to hang it. 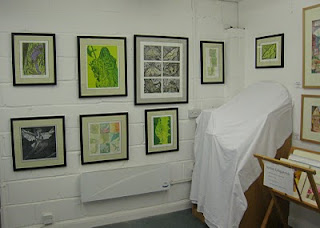 We arrived promptly - a little too promptly as it turned out, they weren't quite ready for us.  As it was a lovely sunny day we sat outside a local café with coffee and doughnuts for a while; then returned to get hanging.  Everyone had decided to put up their work in at least two tiers (Sue went for three) and we worked solidly for a couple of hours, with J helping out as usual - he hung all of my stuff and quite a bit of Helen's too, bless him!  Judi finished first; I don't have a photo of her glass display so that will have to wait for a future blog.  When she left I think the rest of us had about half of our work in place . . . 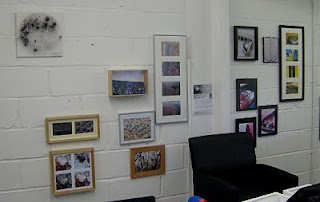 Undaunted, we pressed on, until - amazement!  Helen had found hanging space for far more prints than she'd expected, Hillary had room for everything she wanted to show.  Sue was planning to print and frame an additional black and white photo to finish her wall, and I had to send J home to bring a couple of extra canvas photo prints to fill mine.  How did that happen?  we even had room for Hillary's funky bubble wrap snake! 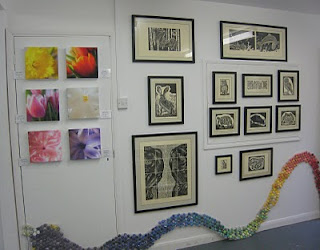 The Artscape Arts exhibition is open for the whole of September (not Sundays or Friday mornings) and at least one of us - more likely two - will be at Artscape on Thursdays, Fridays and Saturdays from September 11th onwards as part of Herts Open Studios (Thursdays and Saturdays 10am - 4pm, Fridays 1pm - 4pm).  Hope to see you there!
Posted by Teresa N at 21:05 1 comment: 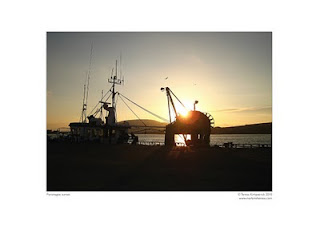 Preparations for Herts Open Studios are now in full swing, with participating artists up to their ears in brochures, mail-outs, leaflets and the other publicity-related and admin stuff which is essential to publicise the event.  Tomorrow we're spending most of the day at the Farmers' Market in Harpenden to promote the Harpenden artists taking part.  Paintings are about to go up in some local shop windows and in Wesley's, the Methodist Church café in the High Street - it's all go!! 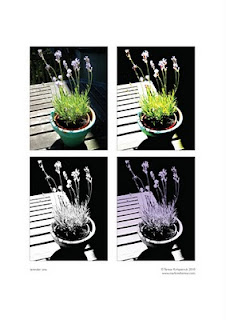 All this is intended to generate interest, of course, and with this in mind I've reorganised my Pro Gallery on Photobox in an attempt to make it more user-friendly.  I haven't introduced a lot of new photos this year, but my range of Pro Posters with A4 images on an A3 backbround has been expanded to include some new images, including a couple of experimental layouts of lavender in flower pots.  I had great fun playing with these, and who knows?  somebody might like them! 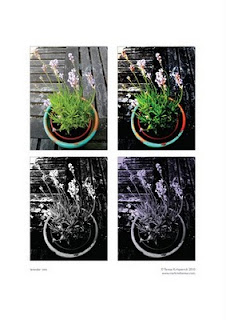 Full details of the exhibition at Artscape, in which I'm showing various pieces along with four other local artists, can be found here.  For general information about Herts Open Studios click here.
Posted by Teresa N at 17:15 1 comment: