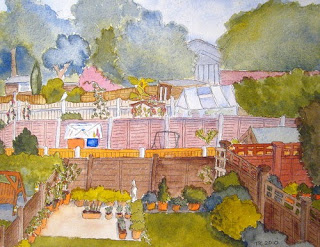 View from my Back Bedroom Window
© Teresa Kirkpatrick 2010

I've had paintings, prints and photos all over the place during September.  Most of my recent stuff is still at Artscape for Open Studios until the end of the month, while May Evening Harpenden Common has been on show at Wesley's Café at the Methodist Church in the High Street all month as part of the publicity for the event.  I took He Cast Him a Lappet, my most recent Tolkien painting (despite being a year old) to Oxonmoot (the annual Tolkien Society get-together) last weekend, while Red Tulips in a Blue Glass Vase and Flying Kites at Rossbeigh Beach are on their way to Letchworth tomorrow for the annual Open Exhibition.  I would have had two more paintings on show last weekend at the St Albans Summer Art Exhibition, but it was cancelled.  I was almost relieved . .  .

Amidst all this chaos I've managed to produce another painting. I did it over two Saturdays spent at Artscape as part of Open Studios, and the subject is the View from my Back Bedroom Window. Ironically Open Studios isn't the best place to paint; you are constantly interrupted by visitors (which is, after all, the whole point of Open Studios) and last year I found I couldn't concentrate at all.  So I was delighted when I got this little pen and wash piece home and realised that I rather liked it.  It's pretty accurate, and gives a nice insight into how my neighbours use their gardens.  The view is one I never tire of - it's quite an ordinary scene but constantly changing; birds fly in and out, you can often see horses at the farm over the back (although I didn't dare attempt to depict one!) and of course the seasons come and go.  This is the view at the height of summer, which is already over.   Such happy memories!
Posted by Teresa N at 22:08 1 comment: 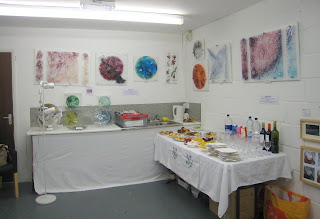 All set up - Judi Menges' glass art and a few drinks & nibbles to help the Open Evening go with a swing!
© Teresa Kirkpatrick 2010

This year's Herts Open Studios is under way, and for those of us exhibiting under the Artscape Arts banner it's been a great start!  as usual we were convinced that nobody much would turn up to our Open Evening last Friday.  And once again our predictions proved groundless, with around seventy visitors during the hour and a half party.  All five of us had managed to find room to display what we wanted to - from wall hung art to cards and jewellery - and we had room for a table of drinks & snacks so we could offer the guests some refreshment. 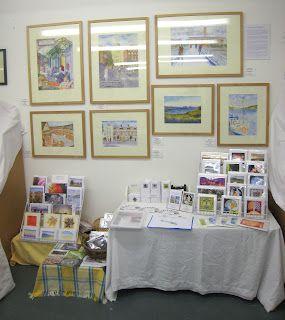 Our first guest was the Town Mayor, who brought along some of his family; closely followed by a printmaker friend of Helen's; and then I lost count.  J played his usual role of Artist's Assistant, handing out drinks and bonhomie;  the rest of us chatted to visitors and family members, and - yes - made some sales!  To my delight a variety of cards, a photo poster (Curiosity), a giclée print of Cardinal's Wharf and one of my very first monoprints all made it out the door clutched in the hands of what appeared to be extremely satisfied customers.   Sue was doing a roaring trade in cards &  prints, and best of all sold one of her originals - you can see her work here.   Helen's linocuts were proving popular and Judi and Hillary were also taking orders! 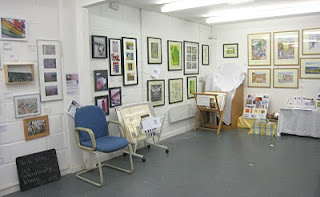 Some of Hillary's & Helen's exhibits and a thoughtfully provided chair
© Teresa Kirkpatrick 2010
We were thrilled by the success of the evening.  It was busy, but not too crowded;  everyone enjoyed themselves enough to linger rather than rush off; and we got excellent feedback.  People ate, drank, chatted, and admired the art.  Downstairs, Artscape's David even made some sales on the shop floor.  The hour and a half rushed by and we realised we hadn't had a chance to eat anything ourselves . . . but we'd all had so much fun! 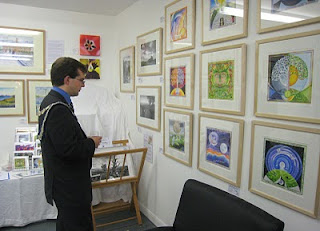