It's a reflective time of year, as the clocks go back and the nights draw in.  Less daylight means shorter studio sessions; and as I'm trying something new I've taken plenty of time when considering how to go about things. I made several attempts to turn a sketch of an acer leaf into a design for a Japanese woodblock print, and was delighted when I finally hit upon something I was happy with.

At the same time, I've been selling Christmas cards in aid of the church building fund: unable to do this after Mass, as I normally would, I sent out an email and was delighted by the response.  Someone asked if I'd print the design in indigo on white card, and it was interesting to see the result; I think they look rather smart.

My next Japanese Woodblock challenge was to work out how to transfer the image for cutting - at which point I realised that while my lovely design fitted onto the block, there wouldn't be enough room to cut the kento registration marks without running the risk of splitting the wood.  And there would be no margin down one side. That led to quite a bit more careful contemplation . . .

One end of the studio was full of drying cards; at the other end of the table my sketchbook lay open reproachfully as I tried to work out a solution to the problem.  I considered buying bigger blocks, or printing the leaf anyway, regardless of the margins.  Then I realised that with a bit of careful positioning I could use some stick-on kentos for this first attempt, as they take up less space.

My notebook is now full of reminders and suggestions for various blocks and colourways, but at least I have what I hope is a workable plan.  So it's been a busy time in the studio; I think I've managed to avoid falling at the first hurdle as far as Japanese Woodblock is concerned, but we'll see.  You have to start somewhere!

Summer finished early this year, with a damp and chilly Autumn taking its place. I continue to walk the surrounding lanes in almost all weathers, dodging the rain, with a camera at the ready.  The walks are so much more interesting at this time of year - as long as you have the right clothes - and shoes! 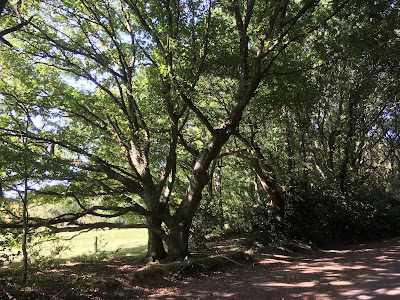 When the sun has been out it's been quite low in the sky, throwing some wonderfully atmospheric shadows; when it hasn't been shining it's still been possible to capture some splendid foliage in all its glory. A great deal of timely rain during the summer has resulted in lush hedgerows.

My favourite field (yes, I do have one) has changed in the space of a month; freshly ploughed and sown during September, it's now displaying the first signs of growth.  I almost always take a photo when I pass it or cross it, and have made various sketches of it; now I'm thinking it would make a good subject for a linocut.

I've spotted a lot of holly in different stages of development while I've been out walking; all of it providing vitally nutritious food for birds as the weather gets colder and the nights draw in.  I realised with a jolt last week that it's almost time to put the clocks back - how did that happen?

Ivy is a major source of nectar for insects right now - is it my imagination, or is it flowering more lavishly this year? We have plenty at home but there's even more in the surrounding countryside; it's good to know that the bees still out and about won't be going hungry this year!