As summer draws to a close I'm taking a look back through my photos. I've been further afield than I remember, and you'd never know that the weather hasn't been that good: probably because I only get my camera out with real enthusiasm when it's sunny.

In June, the wild flowers were out in force, thanks to a burst of warmth following a cold and protracted spring.  The wildlife photos were taken at the Weald & Downland Museum in early August. As for July, well, see my post about Childwickbury Arts Fair - it stands out as one of the few dry weekends we've had.

I took the photo above in one of the museum's many reconstructed houses; I think this one was mediaeval.  I'd taken my DSLR with me and was delighted with this shot - I reckon it only needs a bunch of grapes and a dead pheasant to be reminiscent of a still life by a Dutch Master.

By mid month berries were appearing in the hedgerows and the chilly breeze showed all the signs of approaching autumn.  How could that be, I wondered, when we were still waiting for some proper summer sunshine?

Towards the Bank Holiday we spent a few sunny days in Dorset.  I liked this Rosa Rugosa so much, I'm trying to work out where I can put one in the garden.  The rosehips were enormous!  We were in the middle of farming country, surrounded by fields of sheep and cattle, and tractors pulling unfeasibly large loads of hay bales.

It wouldn't be right to finish this post without mentioning the hollyhocks, which have been absolutely everywhere this year. In every place I've been, including close to home, they've been blooming their socks off - so much so that I feel an artwork coming on. Maybe they've thrived on that dodgy weather?

The last few weeks have been busy and extremely enjoyable, as I'm preparing for #HertsOpenStudios while continuing with ventures and projects begun earlier in the year. At the start of July I sent off my two reduction linocut prints to the Awagami International Mini Print Exhibition. Given the situation in Japan at the moment, I was grateful to receive confirmation of their safe arrival within a week or so of posting.

After this I turned to framing my latest work for Open Studios: two more of the prints created for AIMPE and some small watercolours.  The little pink cordless drill I got last Christmas proved invaluable when tightening D-rings (and unscrewing them when necessary) - and now I've invested in some proper wire cutters rather than struggling to cut the picture wire with scissors. Should have done that years ago . . .

I then ordered some greetings cards from Redcliffe Imaging - which arrived promptly and beautifully printed, along with biodegradeable sleeves to wrap them in.  For sustainability reasons I don't really like wrapping cards, but they have to be protected against a lot of handling.  With marketing in mind, I got some smart new business cards and publicity postcards from Moo.

When I have had a spare afternoon or two, I've taken the opportunity to try out a calligraphy set which I was given.  Calligraphy is best done on a sloping surface, so I dug out my Mum's old easel to rest on.  It was fun to try something new. And I've made time to start reading Makoto Fujimura's excellent book Art and Faith, which was recommended to me.

I've had work in two exhibitions at The Workhouse Dunstable during the last six weeks or so and I've enjoyed a couple of Friday mornings helping out there, too. The gallery is now closed until the beginning of September but I'm looking forward to showing more pieces there this Autumn.  In the meantime I have plenty still to do for Open Studios! 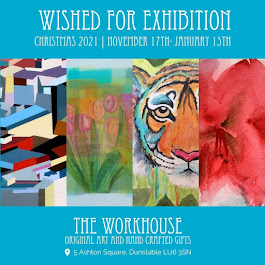 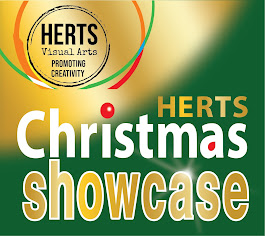