As October draws to a close I'm preparing for a trip to Ireland - a chance to rest, recharge my batteries and hopefully do a bit of sketching, painting and photo-taking (weather permitting).  A busy time at work, wedding preparations,  and -  this weekend - a nasty cold, have prevented me from doing much art recently: the underdrawing for my next painting is sitting in my studio waiting patiently for attention.  It might turn out to be a straight watercolour; or a pen & watercolour wash; or even an illustration in gouache;  I haven't quite decided yet.

I first thought about tackling the subject (Yavanna from JRR Tolkien's The Silmarillion) a couple of years ago, and it's taken me all this time to get anything usable down on paper.  This weekend I've had several good ideas about how to proceed, which need a little thought.  So I hope she won't feel too neglected if I make her wait a little longer!
Posted by Teresa N at 18:48 1 comment: 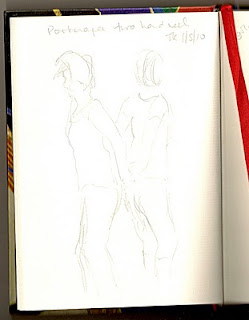 I was watching a TV programme about Raphael last night, when they showed some of his sketches - lovingly preserved and mounted to protect them down the centuries.  "Originally these would just have been scraps of paper lying around in Raphael's studio" said the presenter.  Much like my own sketches, then LOL.  I'm guiltily aware that I don't do enough drawing;  self-help books about art are stuffed with advice such as "a true artist draws something every day" and "always carry a sketchbook with you".  And I do carry one with me most days; it commutes to London with me, and home again, usually unopened.  It's not that I haven't tried; I could produce some lively impressions of the travelling public at City Thameslink if they (and I) could only stay still long enough for me to get something down on paper.  If I had the courage, I could easily get my book out on the train itself and cover page after page with images of commuters reading their books or listening to their i-Pods.  And if I could get out of the office at lunchtime I could happily sketch the tourists milling around the Tate and the Millenium Bridge (but I'd never get the chance to eat lunch, or check my private emails). 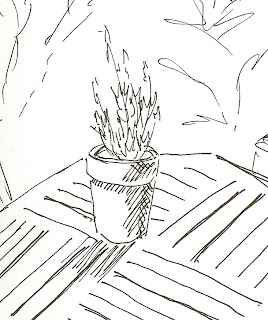 lavender in a pot
© Teresa Kirkaptrick 2010

So in the main my sketchbooks tend to come into their own on holiday or at home.  I jotted Two Hand Reel down during a set dance workshop in Portmagee; together with a whole bunch of photos it may make a painting one day. But - another confession - I really don't much like drawing with pencil.  I spent the two Life Drawing courses I attended at Central St Martins trying to avoid it; preferring to use charcoal, messy though it is, or ink - which is permanent and doesn't allow for mistakes.  This summer I bought some small sketching pens which use waterproof ink, and I've been much happier with those (and therefore more inclined to get the sketchbook out).   Lavender in a Pot is my favourite part of a much larger sketch, much of which is out of perspective LOL. 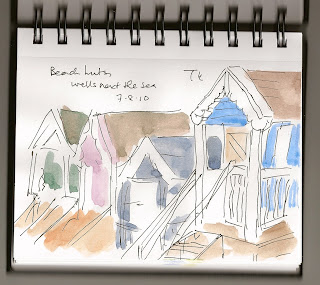 During our long weekend at Wells-next-the-Sea I not only managed to do some sketching but had time to add some watercolour washes in an attempt to bring the drawing to life.  I do sometimes try sketching direct with watercolour, without drawing first, but inevitably the result is a soggy mass of colour which only I can interpret.   Still, that's the point of a sketch; they are reminders of what the artist actually sees.  Sometimes I will sketch from a photograph before I paint a scene; that way there's a chance I will actually paint the scene itself rather than the photo.  And I can't be sure what will turn out to be of use in the end;  I might not "need" a drawing of a dressed-up stallholder at the Shire Festival but if I ever decide to paint Gandalf sitting down, he'll come in very handy!  and if I ever have an urge to depict a whole bunch of plants in flowerpots I can use the sketch I made sitting outside the Talbot Building at Lady Margaret Hall during Oxonmoot.  You never know . . . 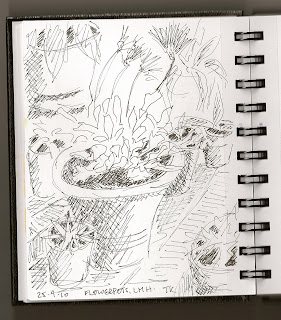