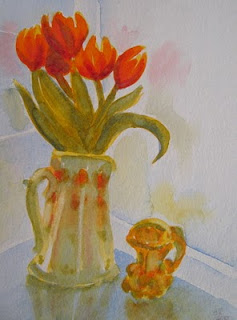 On the whole I'm pleased with the finished painting; ironically the least spontaneous part is the flowers which caught my eye in the first place. Painted from a photo, you see. I could probably make a better job of the jugs if I did it over again, but they'd be far less lively!
Posted by Teresa N at 22:01 4 comments: 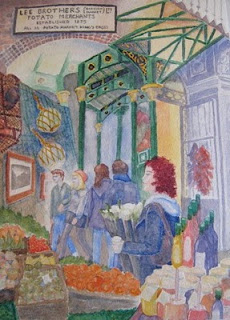 One dull February day I found myself wandering around in the colourful bustle of Borough Market, popular amongst foodies for its vast array of fruit & veg, fish, meat, unusual cheeses and other delights. Nestling under the railway arches at London Bridge station, it's due for some hopefully sympathetic redevelopment as part of the Thameslink Project. I've been meaning to paint it for some time, so I took a series of reference shots with the camera on my new mobile phone.

Initially I stuck a dozen photos on my ideas board, hoping to capture the hustle & bustle, the colour, the soaring Victorian cast iron work, and the variety of goods on offer. I realised fairly quickly that a conventional painting Would Not Do, but the snap of a girl clutching a bouquet of white roses and lilies (and a can of coke, which has become a paper cup in the painting) gave me something to anchor eight or so of the other images to.

The result is Borough Market (original title, eh?). 48 cm x 36 cm, it took me eight intense two-hour sessions over four weekends to complete, using a no. 6 brush and plenty of Viridian Green, Raw Sienna, Alizarin Crimson and French Ultramarine. The whole experience has been absorbing, exhausting, and ultimately tremendously rewarding!