July has turned out to be the month for exhibitions, and I'm not just talking Childwickbury here - I've taken part in a couple myself, and visited two more in the past fortnight!


Throughout July two of my paintings have been on show in the Hitchin Art Trail, which regular readers of this blog will know coincides with the annual Hitchin Festival.  The first of these, Pato's Wish, went to The Town Fryer fish and chip shop in Hermitage Road. This was a very suitable location for a painting of a fishing trawler, and was hung by the counter, so that customers would be able to take a look at it while queuing for their fish and chips:

My second entry, Poppy Fields, found itself in the window of Norgans Lettings in Sun Street:

Both Norgans and The Town Fryer are regular supporters of the Hitchin Art Trail, which invites local businesses to choose entries to put on display.  We walked the Trail ourselves on a blazing hot day, using the leaflet thoughtfully provided by Tim of Tim's Art Supplies.  There were around 60 works in as many locations, with a variety of media and styles, and as usual we enjoyed the experience very much!

I'd read about Ewing Paddock's exhibition Painting London Underground in an article in Artists & Illustrators magazine. He spent several years approaching people on the London Underground and painting those who were willing to take part;  I just love that he built a replica tube carriage in his studio to get the full effect! this exhibition at the Bankside Gallery was so interesting, each painting had a story.  The replica tube carriage also formed part of the display.  My favourite was Adam, Eve (so clever!) and I was able to tell him so, because the artist himself was right there in the gallery . . . 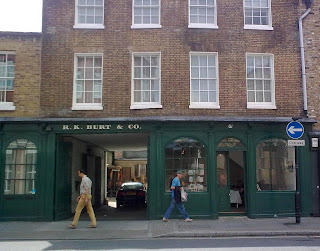 Coming out of Mass Friday lunchtime, I noticed some activity around what looked like a shop at the end of the road.  On closer inspection it turned out to be not a shop but a gallery run by paper makers R K Burt and Company.  The exhibition was Paper Works by the Society of Graphic Fine Art, and a jolly fine exhibition it was, too.

I had an interesting chat with the SGA people there (and a fellow visitor who like me was keen to further develop his own artistic skills in retirement).  The gallery is in Union Street,  just around the corner from the printmaking equipment treasure trove that is Intaglio Printmaker (I treated myself to a water stone there just a few weeks ago).  Going down those steep wooden stairs into Intaglio Printmaker is one of the things I am really going to miss when I stop working in London, but luckily they do mail order.  And I might pop in if I am up in London for any reason - as a commuter I can never wait to get out of London, but once I've stopped commuting I can be a visitor and really appreciate it!

Last but not least, this past weekend has seen the second HVA Annual Summer Exhibition at the Harpenden Public Halls.  A taster exhibition for Herts Open Studios in September, it also provided an opportunity for those HVA members who are not participating in Open Studios to get their work seen: paintings, photos, textiles, jewellery, glass, wood work, sculpture - right here in Harpenden.  I showed Painting the Boat, Gondoliers in Winter and Two Hand Reel.  The exhibition was in conjunction with the Beds Herts Bucks Print Society, so we were able to view some stunning prints in the adjacent hall.

The next exhibition coming up will of course be our own  Artscape Arts, concurrent with our participation in Herts Open Studios.  I really must get going with my preparations for that one . . . .!


Acknowledgements:
Many thanks to The Town Fryer and Norgans Lettings for displaying my paintings on the Hitchin Art Trail, to all the local businesses which supported the Trail and of course to Tim and his staff at Tim's Art Supplies for organising the whole thing!
Thanks also to Linda Warminger and everyone else involved in setting up and helping out with the HVA Summer exhibition.  As usual you did a grand job!
Posted by Teresa N at 10:19 3 comments:


Childwickbury Arts Fair is a wonderful chance to see local and international artists' work in a gorgeous setting.  We live close by, and it's such fun to visit, especially this year because Summer has arrived at last!  With temperatures soaring into the eighties we decked ourselves out with hats and sunscreen and made our way to the Childwickbury estate, once owned by film director Stanley Kubrick, and still home to his widow Christiane - a professional artist who initiated the first Arts Fair there ten years ago, helped by her jewellery-maker-artist daughter Katharina.

We joined the crowds flocking to the various marquees and outbuildings used to house the exhibition.  Half a dozen or so painters occupied the first marquee, all of whom appeared to be doing demos or chatting to visitors - including local artists  Millie Canning and Anna Perlin.  They were in for a long stint - Saturday's opening times were 10am to 10pm, with many people expected to delay their visit to the evening to avoid the high temperatures.

Christiane Kubrick had set up an enormous triptych in the corner of her marquee, with works of various sizes ranged around the walls.  Her paintings are mainly vibrant oils - some of them are huge - and many have been inspired by the house and the rolling countryside which surrounds it.

The most imposing of the outbuildings is the stable block, with its triple arch entrance - a work of art in itself - and the stables provided a wonderful respite from the heat outside; we spent a long time looking at the various stalls selling textiles, flowers, paintings, glassware and jewellery.

Apart from the spectacular setting, it's the little things which make a difference at Childwickbury:  artists demonstrating on paint-spattered wooden tables; picnics in the shade and live music -  this year, to add to the atmosphere in the stables, a harpist was playing by one of the doors.

And then there are the flowers: shrubs growing in the grounds, roses climbing the walls, brightly coloured hedges, tubs and planters everywhere.  Exploring some tents next door to the stables, I spotted a great way of preventing folk from tripping over a guy rope (now there's a thought for Art on the Common!):

As well as painting, sculpture, jewellery, glass and textiles there were woodworkers, furniture makers and potters all displaying their wares and in many cases their techniques - and everyone was happy to talk to visitors.  We found ourselves chatting to watercolourist Jenny Wheatley RWS about the paper she uses!

The acclaimed French sculptor Gerard Bellaiche had a wonderful display of metal sculptures on show behind the stable block; these are made from mundane items such as cutlery, pieces of obsolete farming or engineering machinery - scrap metal!  Many of the exhibitors are regulars, and greet each other - and the visitors - like old friends.

By now we were peckish and stopped at one of the many food stalls in front of the stable block for thin-crust pizza baked in a wood-fired oven, eating at a table which we dragged into the shade of a rose hedge to keep the fierce sunshine at bay.  A live band had started up, with entertainment promised until late in the evening.

We made our way through the children's art class in the courtyard (seated on the traditional donkey easels I remember from my life drawing studies at Central St Martins) to the printmakers' shed in the cow yard, where we found  Geri Waddington demonstrating the most intricate wood engravings:


At least one of the printmakers usually brings a press on which to demonstrate, which I look at with a mixture of admiration and envy (one day . . . !) - I think the one in the photo below is an etching press.  I didn't get the chance to ask about it, but I did have a brief discussion about registering linocuts using a separate plate for each colour - something I'm keen to try out myself.


After tea and cake seated at one of the tables thoughtfully positioned in the shade of the stable wall, we bought some cards and made our way home.  Visitors were still arriving in droves - we knew they were in for a treat.  And there's the Childwickbury Christmas Market to look forward to later in the year - I've never managed to get to it yet.  But perhaps this time things will be different . . . !