June has been a wierd month for me. I've hardly painted anything at all beyond a few experimental underwater landscapes involving enough salt and water on the paper to support sea life. I've simply had too many ideas (!) and not enough time. I've had four possible paintings on my project board (OK, scruffy bit of cardboard with some paper clips attached) all month and today I finally put two of them on the back burner and decided to go with the other two. When I find time to paint.

Part of the problem is that it's the season for art shows. I can't resist these; even if I haven't entered I like to go along and take a look at what other artists do and how they do it. First it was the Ayot Art Show, a lovely Palladian church crammed floor to ceiling with all kinds of artwork. Getting there was a bit of an adventure as all roads into Ayot St Lawrence seemed to be flooded, but it was well worth it!

The following weekend we had Art on the Common right here in Harpenden, in blazing sunshine. A wonderful range of paintings, photography, textiles etc, beautifully displayed for the most part in an assortment of gazebos (a sensible precaution given the vagaries of the English Summer), and a chunk of the proceeds going to charity. I must admit I came straight home and started hunting for a suitable gazebo on the internet LOL. This weekend saw the inaugural St Albans Summer Art Exhibition at the Town Hall. I did enter a couple of paintings for that one. It turned out to be an excellent venue, with lots of space to walk around and take a look at the stunning variety of exhibits on show.

I must get round to doing some painting during July. Although of course next weekend it's the Childwickbury Art Fair and a fortnight after that we're going to Art in Action at Waterperry . . . !
Posted by Teresa N at 18:40 No comments: 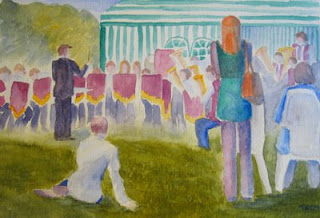 My two most recent paintings were done in one weekend. The first is one which I'd been meaning to paint for ages. Last Summer we visited a festival in the Bishop of Winchester's palace grounds, because a young relative was playing with a local youth band. While we were watching my attention was caught by a couple in front of us - he, sitting casually on the grass while she stood with arms folded, her red hair and green dress brightening an unfortunately dull day. I took a photo because I knew I would want to recapture the scene in paint at some point. Would it be pure watercolour or line & wash? or some different approach? I couldn't decide. 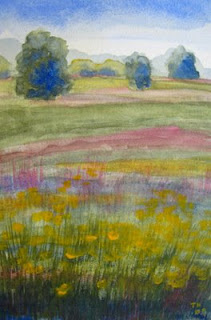 Then a couple of weeks ago we had some beautiful late Spring weather. Harpenden Common was looking its loveliest and I got the camera out, even going so far as to get my other half to park the car at a suitable vantage point on a busy road . . . I knew the shots would be no good as photos because the light was poor, but for reference they would be ideal.

That was the Friday evening. By Sunday night I'd reinterpreted the buttercups on the Common and finally got round to painting the couple watching the band (I even managed to sneak my partner's nephew into the top right-hand corner). I had photos of each in front of me but for general reference only - I prefer to let the painting take on a life of its own rather than faithfully copy a snapshot. The Common painting was almost done from memory - an impression of the sea of flowers and grasses stretched out in front of me and my camera. The painting of the band, on the other hand, developed a character of its own as I imagined what each of the musicians was thinking.

And of course, in my paintings the festival is taking place on a bright day and the Common is bathed in entirely fictional light. Isn't watercolour wonderful!!
Posted by Teresa N at 18:56 2 comments: