Some things take a while to come to fruition.  My latest project, a painting of Yavanna Kementári from JRR Tolkien's The Silmarillion, took two years to come to the drawing board;  just how do you paint one of the Valar?  Tolkien gives us compelling descriptions of Yavanna:  in the form of a woman she is tall, and robed in green*; some have seen her standing like a tree under heaven, crowned with the Sun*; elsewhere in The Sil he tells of how she sings into existence the Two Trees of Valinor, Telperion and Laurelin, who wax and wane in turn and give a lovely light: Thus in Valinor twice a day there came a gentle hour of softer light when both trees were faint and their gold and silver beams were mingled*. To paint such a vision was an ambitious plan, and for a long time I had no idea how to go about it.
﻿
﻿
﻿
﻿ ﻿

Last summer it became clear that any kind of depiction would be better than none, so I started to sketch some basic layouts.  I wanted an Art Nouveau feel to the piece and decided to frame Yavanna with the Two Trees.  How to place her was the next question;  I decided against a pose, preferring to show her almost in passing, perhaps with a fern springing from the hem of her cloak as she walked.  By October I was able to put down a pencil sketch, and eventually, having modified it several times, I felt confident enough to ink it up, holding my breath as I did so.

Now came my next decision.  The outline sketch was extremely simple; if I simply filled in the colour it would look lifeless.   There was no way I could make it look realistic - who knows what a Valar looks like?  or the Two Trees?  and how on earth do you depict gold and silver light, mingling??  I had no idea what to do, and Christmas came and went. In the meantime I did some experimental paintings with bold washes and plenty of water, as described on this blog in January.  So I asked myself: what would happen if I used those on my painting of Yavanna?
﻿
﻿


Action followed thought (not too much thought- counter-productive!). I wetted the paper and dropped in quantities of turquoise and indian yellow.  Then I added some ultramarine and quinacridone gold for good measure.  The whole thing was very, very wet.  For a while I sat there and literally watched the paint drying;  depending on where the pools of water had gathered, colour was marching across the paper, blending and marching back again.  I was pretty sure there were some wonderful greens growing in there, but I couldn't be certain how they would dry.  I made myself walk away until the morning.


When I went back the next day, I was astounded with the result.  I almost didn't dare touch it any more; wouldn't it do perfectly well as it was?  Tempted as I was to leave it, I decided to carry on, to find out how Yavanna would present herself to me.  But that will have to wait until the next blog - partly because she isn't finished yet  . . . .!

* The Silmarillion, by JRR Tolkien, published by HarperCollins
Posted by Teresa N at 18:00 2 comments:

I've never got on with masking fluid.  No matter how careful I am, the surface of the paper always gets damaged, whether I'm using it neat or diluted.  Nonetheless, in a continued spurt of post-Christmas enthusiasm, I decided a couple of weekends ago to have another try with it, drawing the outline of a dove holding an olive branch.  To create a really vibrant background I dampened rather than wetted the paper, and dropped in large amounts of pure colour.  Then I spattered some water over the  whole thing, just to see what would happen. 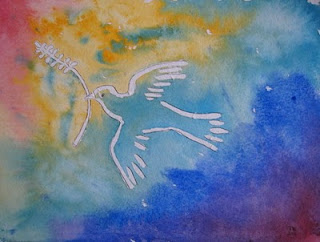 The result was a fabulous range of colour, softened in places by some sublte runbacks.  But when I peeled off the masking fluid, a little of the surface paper came away with it.  The paper I use is extremely soft, which explains the problem (on the other hand, you can soak it several times without it complaining at all LOL)  I further defined the dove with a pen, but on the whole it's rather unsatisfactory. Still, the success of the background had made me keen to try again - but without the masking fluid next time!

Accordingly, last Sunday I carefully drew a pencil outline of a dove, then rubbed most of it out, dampened the area outside the outline and lobbed in even more pure colour than I had with the previous painting.  After it dried off a little I spattered some water to see what would happen.  Then I left it alone for several hours before painting in the dove with a backlit effect (I should 'fess up right here that I pinched the idea of the backlit dove from a Christmas card I got several years ago). 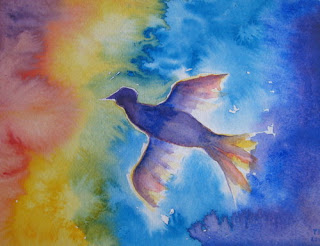 This produced a far better result - although the dove is a bit wonky, the backlighting gives a lively effect.  I'm really pleased with the intensity of colour. And, as last Sunday was the feast of the Baptism of the Lord, when according to the gospel of Matthew, the Spirit of God descended on Jesus like a dove, I've called it Spirit.

Finally, this week my latest order arrived from Great Art.  I've decided to liven up my colour palette and introduce some of my experimental techniques into other areas of my painting.  So - more paper, a new porcelain palette, several new tubes of watercolour paint in shades I haven't used before; oh yes, and I must get round to doing some more linocutting . . .
Posted by Teresa N at 17:15 1 comment: