There are many clichés about photography. "Every picture tells a story" is one.  "The camera never lies" is another.  But we all know that the camera can lie (especially if Photoshop is involved), and the story that the picture is telling may not be entirely accurate!  Some photos I took on my recent holiday in Ireland demonstrate this. 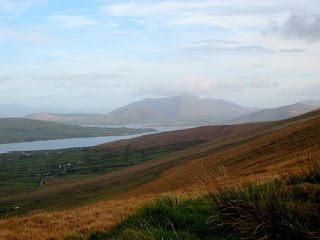 view along the Portmagee Channel towards Caherciveen
© Teresa Kirkpatrick 2010

This pretty view was taken from the side of a road going over the mountains between Portmagee and St Finan's Bay in County Kerry.  The view does look like this - but only if you're prepared to get out of the car and do a bit of a balancing act on the grass at the edge of the road.  You wouldn't see this from the car! or only a glimpse, at least. 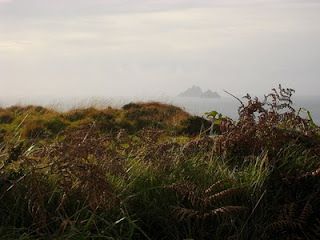 This view of the Skellig Islands isn't one you'd normally see from the car either; not even if you got out for a look.  Standing upright, you can see over the  vegetation to the coastline below, a sight which (when we were there at least) was enhanced by an upside-down kitchen table which somebody had lobbed into the bushes.  So a certain amount of crouching went on here to ensure that it didn't get into shot! 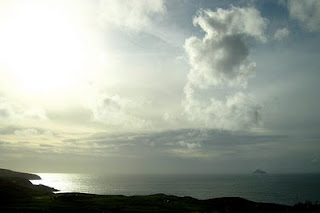 This spectacular shot was, believe it or not, taken from the car and is part of a series, many of which were completely out of focus.  And, while this is an accurate representation of what we could see, the original photo was at quite an angle and has  had to be straightened. 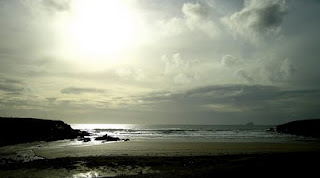 The same is true of my last example; it's not easy to keep the camera straight when you are taking a series of shots from an open car.  This one had the sea wall in the foreground with something horrid and plastic on it - so I cropped that out. 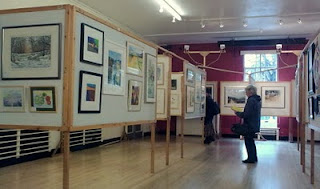 I spent last Saturday afternoon helping out with the stewarding at the Harpenden Arts Club annual Open Exhibition.  Life is so chaotic at the moment that I haven't managed to get to any club meetings yet this year;  and I suppose I could have stayed at home to work on some artistic projects of my own.  But I like to hear what the visitors have to say, and I wanted to see the exhibition anyway,  having not managed to get to the private view.  At the last minute I rememberd that stewards are allowed to have their own greetings cards available for sale during their stint, and hastily shoved some into a small basket, luckily realising as I did so that photographic cards would not be suitable!  Fortunately I've had cards made of some of my paintings, and these, along with my remaining mono leaf print cards, made a decent selection.

With two minutes to spare before the start of my shift I bagged the last parking space outside the Public Halls and ran indoors (then straight out again to fetch the cards which I'd left in the car by mistake).  The other stewards on duty were a charming retired couple; we spent a few minutes reading our instructions and then leafed through the sales book to see what had already sold.  Despite the recession the club had made some respectable sales already;  around a dozen framed items and almost as many mounted unframed had gone.  One of my companions had sold a couple of each!  We took turns to walk around the exhibition keeping  an eye on visitors and choosing our own favourites (all visitors were asked to vote for their top three).  As usual the standard was extremely high; exhibits ranged from large traditional landscapes in pastel to small acrylic abstracts, with etchings, collograph and monoprints also represented.  I showed Paula's Pansy and Elderly Couple on Rossbeigh Beach. 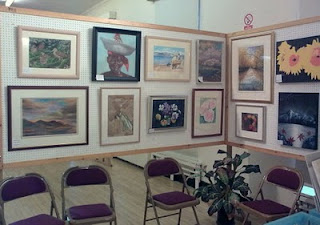 Elderly Couple on show alongside various other exhibits
© Teresa Kirkpatrick 2010

We had a steady stream of visitors during our two hours; halfway through, my fellow stewards produced a flask of tea and a box of shortbread fingers which they kindly shared with me.  And to complete my afternoon, I sold a few cards!  By the time I took my leave at 4pm a beautiful sunset was lighting up the whole sky.  It had been a thoroughly civilized afternoon.
Posted by Teresa N at 19:03 3 comments: