In the Pink (and other colours)

I decided to spend the Bank Holiday weekend printmaking (thereby neatly avoiding the dilemma of how to start my next London series watercolour, a view of St Paul's Cathedral). I wsas particularly keen to try out my new combined inking glass and linocut registration device - aka an old picture frame taken to pieces. You can see it in the photo below, along with some prints of the first colour in the background, and the design (plus the photo of pink tulips which inspired it) at the front. 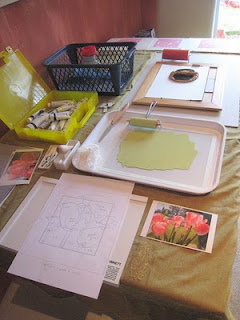 Unfortunately I got so carried away with the success of this contraption - it does work very well - that I lost concentration and missed out one of the cuts. I compensated by adapting the design, but it wasn't how it should have been, and overall I was not happy with the resulting prints. Nevertheless I hung them up to dry - they are perfectly registered, after all! - and vowed to try again soon. I've decided I'm not keen on the colours anyway, and I already have a new colour scheme worked out, plus a couple of modifications to the design! 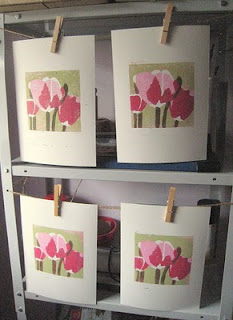 Undaunted, I spent this morning preparing the bases for some monoprints. The idea was to experiment with how various colours interact on one another, particularly the new metallic inks I bought recently - gold, silver and copper. I decided to try out some card blanks, too, and to use cartridge paper for the larger prints. I'm still struggling with ink coverage - a lot depends on the paper, and how well you hand burnish the print. Probably I'm too impatient and give up too soon! I have started using an old wooden spoon, though, which is producing reasonable results. After lunch I gathered three leaves from the acer tree which grows in a pot by the back door (I'd been careful to mention to the tree several days ago that I would need three of its leaves, so it didn't get a nasty shock when I retrieved them). For the rest of the afternoon these three leaves went through sheer torture as I tried out every colour combination which took my fancy. By 6pm I was the exhausted but triumphant creator of twenty two items: 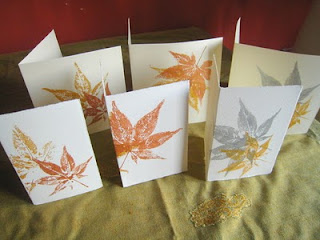 It was interesting to see which combinations worked best. The metallic inks dry far more quickly than the others, spread more thinly, and don't seem to lift off when overprinted. So the way forward might well be metallic bases with a coloured design on the top. Here are some two-tone cards: 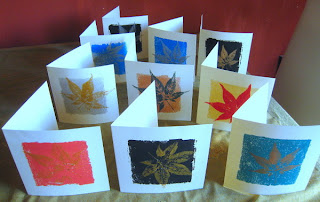 And finally, six monoprints. Some of which might even be saleable! 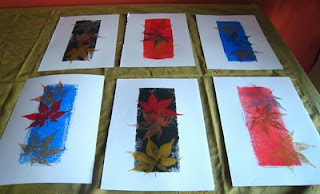 "When a man is tired of London he is tired of life; for there is in London all that life can afford" - Samuel Johnson, 1777 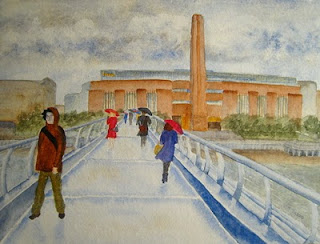 The River Thames is the beating heart of London. I cross it twice a day on my way to and from the office, glorying in the open skies and wide vistas, whatever the weather. It's a real tonic after the cramped streets and stuffy trains.

Usually I cross the river at the Millenium Bridge. Starting life as a wobbly white elephant, it has become one of the main attractions in the capital. Linking St Paul's to the North with the Tate Modern on the South Bank, it is rarely without visitors from all over the world. For us commuters this can be a mixed blessing; but it's worth fighting one's way through the crowds for those wonderful moments when a tourist gasps out loud with admiration as they grab their camera. I swell with pride at such times; this is "my" city - yes, the one I take for granted on a daily basis LOL.

The bridge is a popular location for photographers & film crews, buskers & beggars; joggers run along it, and in the wet children slide on it. And it was on a wet day that I had that "eureka" moment so essential if I'm going to make a painting; a host of umbrellas bobbing, the wind tugging, rain lashing, and the Tate Modern looming up ahead, lights glowing in the gloom. The Millenium Bridge doesn't wobble any more. It's lovely in the sunshine. And it's wonderful in the rain!
Posted by Teresa N at 20:36 3 comments: