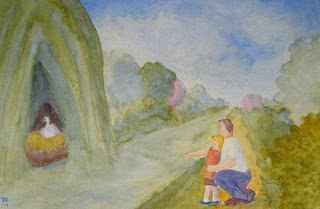 It might seem strange, blogging about a painting which I don't think anyone (apart from me) is going to think much of, but I really like this picture. Just after Easter I took a walk with a couple of friends (and a dog) along the New River at Broxbourne, Hertfordshire. It was a lovely afternoon and I wished I'd brought along my camera. We saw a swan sitting on her nest, various other waterbirds such as coots and grebes, and (memorably) a brace of ducks using the long, straight river just like an aeroplane runway! One of my friends mentioned that he regularly brings his two-year-old grandson to the river to look at the waterfowl.

When I got home, I scribbled down my main impressions of the scene: the long, straight river vanishing in the distance, the swan on her nest etc. Three weeks on (with much happening in between) I finally got around to setting brush to paper. I wanted to capture the feeling of Spring, the drama of the straight lines, the green algae-filled river, the wonder of spotting that swan on her nest. No matter that I can't remember now if the tree roots she was settled in were those of a willow or something else, or that I've almost certainly left out a bridge or two. The man and the boy on the river bank might be my friend and his grandson, but they might not (the child in the painting is probably too tall for a two-year-old). It doesn't even matter that it's not a particularly good rendering of the scene. This one's for me - but I'm sharing it with you!
Posted by Teresa N at 18:15