Mum always looked after the roses; Dad's job was to cut the grass.  Soon the roses will be tended by the new owner of the garden.  I've watched them come into bloom this summer as I've gone back and forth to the bungalow where I grew up, and where Dad lived for fifty years until he died in February.

It was my last chance to appreciate those roses; so I cut a few and put them in a jug on the shelf between my kitchen and my studio.  The scent as they opened reminded me at once of my childhood and I knew I would have to make some kind of painting of them, no matter how short of time I was.

I grabbed a sketchbook and a set of paints which happened to be lying around; the paints were a gift from a generous neighbour who used to rep for Winsor & Newton. I'd never used them until now.  I tried not to think too much about what I was doing, letting myself be guided primarily by the colour and the scent.

The further into the painting I got, I began to realise that this exercise was in some way cathartic for me; it was almost like painting my feelings: about losing my Mum (almost exactly nine years to the day I made the painting); about losing my Dad; and about bidding farewell to my childhood home.

It didn't matter what the painting looked like.  It was the doing of it which was important;  once it was dry I would close the sketchbook and forget about it.  Except that I didn't; something made me dig out a random mount from a drawer to see what it might look like.


Next, a random frame - one which has sat unused in my studio for several years, just waiting for this painting.  And the perfect place: on top of the shelf unit where I keep my art stuff, just in front of the painting I made of my Dad walking by Armstrong's Buildings in Gibraltar, named for his great-grandfather, who built them.


Funny how some things work out, isn't it? 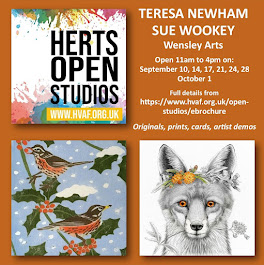 click on the image for details of venue, directions etc