It's not often you can say that an outdoor event is a success when the temperature plummets around ten degrees while you are setting up.  The fifty or so artists at last weekend's Art on the Common arrived in warm sunshine after the previous day's 30 degree heat; by lunchtime we were begging friends and family to fetch fleeces and hot drinks while we sheltered under our gazebos from the gusting rain.

The weather, however, did not deter visitors.  They were arriving before the event even opened - the usual strollers and dog walkers, and later in the day those coming to the Carnival; and plenty of art lovers among them. The Saturday can be slow, especially when it's raining; that simply didn't happen.  I was sharing a gazebo with Hillary Taylor, as usual, and it's fair to say we were pretty busy both days.

My sunflower prints and cards in aid of the  DEC Ukraine Humanitarian Appeal proved popular from the start; the cards were sold out by Sunday lunchtime, and I will have to mount more prints before Open Studios.  Fifteen percent of all the AOC takings were going to Cancer Research, so hopefully we have raised a great deal for charity.

I remembered to bring my A-frame this year, with a couple of posters in it; even so, several people who were specifically looking for me confessed to walking straight past it. To be fair, there was a great deal  to look at so perhaps that's not surprising! And my Sum Up card machine turned out to be a real asset, being pressed into service for two-thirds of my takings.

Sunday was even better, as the weather was much kinder, and we took the opportunity to wander around and chat to other artists, many of whom had also made excellent sales.  Huge thanks to Hillary and both our other halves, who were invaluable, and to Richard Greenaway and his helpers from the Harpenden Photographic Society who organised the whole thing! 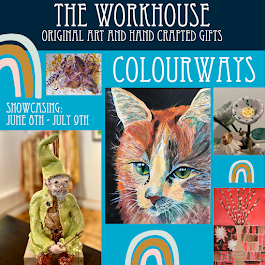